Liz Truss was in JMAC Tokyo! 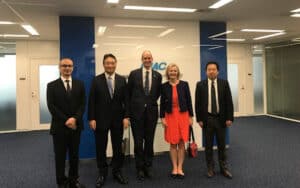 Liz Truss has been elected as the new Prime Minister of the United Kingdom. She actually visited JMAC Tokyo before. There was a commemorative photo taken when she visited our headquarters. We are very happy to introduce it!

On September 21, 2017, Liz Truss, Chief Secretary to the Treasury in UK at that time, visited JMAC headquarters in Tokyo. JMAC consultants responded to her request from the British Embassy in Japan to discuss the policies of MONODZUKURI, such as manufacturing and continuous improvement for value creation in Japan.

We hope to work together to further deepen the Japan-UK industrial relationship.